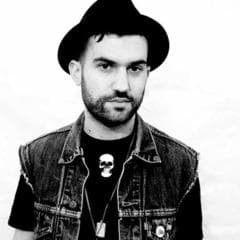 Canadian producer and DJ A-Trak has traveled all over the world, performing at DJ competitions, clubs, and music festivals in countries including Australia, Japan, South Africa, and Norway, all before the tender age of 18. He was the youngest DJ to ever win a DJ-battling world championship (at 15); the first to win all three major championships -- International Turntablist Federation (ITF), Disco Mix Club (DMC), and Vestax World Extravaganza; and the first to win five world championship competitions -- again, all before 18. The turntablist wunderkind made himself a pioneer in this subculture of hip-hop within just a few years. As if the tide couldn't turn more in his favor, Kanye West picked him up to be his personal touring DJ. With featured interviews in hip-hop magazines and on MTV in the mid-2000s, A-Trak began giving this almost-lost art form much-needed mainstream exposure.

IdeaArtI think that's becoming the key to where the whole idea of art and culture are going nowadays anyway, is the idea of curation. Knowing what you like. That's sort of the future right now. Molding something, whether it be a roster on a label, or your blog, or a song, or your DJ set.

MusicThat was my challenge then, how to make scratching still fun for someone who didn't necessarily come to hear that. It was fun to develop that technique. And now in dance music - I'm still a hip-hop guy at heart, but I love dance music.

MusicMy ears are open to all sorts of stuff. I appreciate some of the big electro house guys.I love their music but I also like a lot of the stuff coming out of the U.K. Future garage stuff. A lot of stuff like that.

MusicI love disco and we sample it a lot for Duck Sauce. For me, that sound is kind of a new manifestation.

I think one of the biggest things that's changed in terms of the rapport with the crowd is that now crowds come to hear our songs. We're getting closer and closer to an artist performance.

The lifestyle is strenuous on the body, but it's stimulating to the senses and the mind. So there's a give and take. There are days the flights knock me out, where I feel like the human punching bag that is being on planes every other day. I think people sort of glorify it, like "Oh, you're at parties and there's booze and girls." But it's still work.

We have to wake up early and make songs everyday. I run my record label. You work at hours where your body isn't designed to work. But it's fun.

Right now it feels like we're playing a role, like me and a couple of my friends, in where popular culture is going. That's a very rare thing in a person's life to be able to be a part of that. It's a responsibility I take seriously.

I think whether dance music had exploded in America, I still would've been a DJ a long time. This is my first love.

I've been doing it since I was prepubescent when I loved to scratch records and play good music. As it happens, you know I sort of fell into the mix. I really feel like I played a role in bringing dance music to America years ago.

When I started Fool's Gold and producing consistent records that were like electro beats with rapping on it that was experimental and weird. I made a mixtape called Dirty South Dance where I put rap vocals over dance music. That was literally an experiment. Now all these rappers are rapping on dance music. This is something I've been trying to build for a while.

I worked with him for years. I still think Kanye [West] is one of the most important people in music in the last ten years.

At festivals you kind of have to play the game a bit and you have to play a lot of the big bangers but it's to me it's extra gratifying to be able to play the non-bangers and make it work. Because that's still the craft of the DJ, I think.

Traditionally, with a DJ set, you just go hear DJ that has a good reputation and let the DJ take you somewhere. It was up to the DJ what he wanted to play. Typically in dance music, people didn't know most of the songs a DJ played.

One thing that I learned in recent years from working more with other people is this idea that part of a producer's job is to make people comfortable and confident.

I have a radio show on Sirius XM. I put it up as a free download on my Soundcloud and on iTunes. That's a portal for me once a month, to play songs I know aren't getting played on that station the rest of the week.

At the end of the day, Fool's Gold is a label that, when I hear something I like, I try to grab it for the label. There's a ton of great music coming out.

There are producers that have been my friends for many years that I'm still a big fan of, from Boyz Noize to solo acts. Justice. It really varies. All the way to like...sometimes I'll just find some dude out of Chicago that makes a great house song. I'm feeling a lot of the deep house stuff, Jamie Jones.

I'm not even a trained producer. I just keep following my ear and working on stuff until it sounds the way I like it.

Now I'm able to play on the main stage and play my own tracks and the crowd likes them. I feel like a lot the other DJs play a lot of the same songs, and not to knock them, but it's important to me to go up there and sort of sneak in a bunch of stuff the other guys aren't playing.

I've talked to people who say that their music and their creative work is a much needed and appreciated escape, where they don't have to think about the state of the world; they're not even thinking about themselves so much. They're not trying to express their own experiences of that day or relationship strife or anything.

The essential component of being a DJ is setting the mood; it's playing to the context. So that if you're not able to adapt from one context to another, then you're not a DJ.

When you know what you like and what you want and you're able to nudge things in the right direction, that's more profitable than ever, because there's so much information out there. Everything's saturated. Tastemaker is probably the most overused word, but I still think it's important.

There's a lot of producers that are much more technical or gear-skilled than I am. But I have a pure idea of what I like and where I want to go and I follow that.

When I get up I still check the rap blogs before I check any kind of dance stuff.

I'm still a hip-hop producer. I never put a label on what I can do as a producer or a DJ.

At the end of the day, if I do a set at a festival and I only have an hour, which is kind of short for a DJ set, I know that I have to play at least six of my songs. Then the whole challenge is what do I weave around that. How do I stand out? Because at a festival there's probably fifteen songs every DJ's going to play every hour, for the whole day. That to me is more interesting, because I still feel like an outsider in this world.

Building the scene, going out and doing shows and connecting with the fans, cultivating the fanbase in all these cities. I'm very glad that it's happening.

There's a bit less elbow room and latitude to take it somewhere else, at least at festivals. In the club you can do whatever you want but at festivals, especially Ultra, nowadays the crowd wants to hear our songs.

I'm one of the few DJs who uses turntables. I'm the only DJ that's scratching.

I like getting feedback from people who show a lot of potential, and it's exciting to witness to new talents developing and bourgeoning. I always try to stay around the newest stuff, I don't like to stay with something that's kind of old or approaching it.

A few guys will get up there with turntables as purists, to play vinyl or whatever.

It's always important to me to play something other DJs aren't playing.

There's a ton of amazing music that's not getting heard.

What's amazing about a DJ set is when you're able to re-appropriate a song or give purpose to a song that people didn't really think it was supposed to have. Give it this sort of hidden power by playing it before this song and after that one. That it fits into this logic and it goes farther than you thought it could go.

I was a bit of an outsider in the hip-hop world because I was a scratch kid and people weren't necessarily trying to hear that all the time.

It's a good feeling to have something to stand for in any part of your life. It's like personal integrity.

That's what a DJ is at the end of the day - someone who leads where the music goes. The only thing that's changed is that in America, people have woken up in the last few years and realized it.