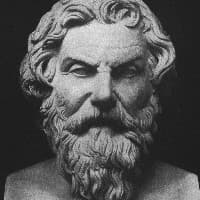 Greek philosopher and a pupil of Socrates

Antisthenes (c. 446 – c. 366 BC) was a Greek philosopher and a pupil of Socrates. Antisthenes first learned rhetoric under Gorgias before becoming an ardent disciple of Socrates. He adopted and developed the ethical side of Socrates' teachings, advocating an ascetic life lived in accordance with virtue. Later writers regarded him as the founder of Cynic philosophy.

PassionAs iron is eaten away by rust, so the envious are consumed by their own passion.

MarriageQuarrels often arise in marriages when the bridal gifts are excessive.

The most useful piece of learning for the uses of life is to unlearn what is untrue.

There are only two people who can tell you the truth about yourself - an enemy who has lost his temper and a friend who loves you dearly.

Wealth and poverty do not lie in a man's estate, but in men's souls.

It is a royal privilege to do good and be ill spoken of.

States are doomed when they are unable to distinguish good men from bad.

It is better to fall in with crows than with flatterers; for in the one case you are devoured when dead, in the other case while alive.

The investigation of the meaning of words is the beginning of education.

Observe your enemies, for they first find out your faults.

When brothers agree, no fortress is so strong as their common life.

We weed out the darnel from the corn and the unfit in war, but do not excuse evil men from the service of the state.

Not to unlearn what you have learned is the most necessary kind of learning.

The advantages of philosophy? That I am able to hold converse with myself.

To all my friends without distinction I am ready to display my opulence: come one, come all; and whosoever likes to take a share is welcome to the wealth that lies within my soul.

Pay attention to your enemies, for they are the first to discover your mistakes.

The most necessary learning is that which unlearns evil.

I'd rather be mad than feel pleasure.

I am sadly afraid that I must have done some wicked thing.

We must not contradict, but instruct him that contradicts us; for a madman is not cured by another running mad also.

It is better to fall among crows than flatterers; for those devour only the dead - these the living.

Royalty does good and is badly spoken of.

How to get rid of having anything to unlearn.