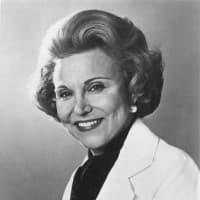 Ann Landers was a pen name created by Chicago Sun-Times advice columnist Ruth Crowley in 1943 and taken over by Esther Pauline "Eppie" Lederer (July 4, 1918 – June 22, 2002) in 1955.[citation needed] For 56 years, the Ask Ann Landers syndicated advice column was a regular feature in many newspapers across North America. Owing to this popularity, "Ann Landers", though fictional, became something of a national institution and cultural icon.

HappinessBragging may not bring happiness, but no man having caught a large fish goes home through an alley.

MarriageSensual pleasures have the fleeting brilliance of a comet; a happy marriage has the tranquillity of a lovely sunset.

MarriageA happy marriage has the tranquility of a lovely sunset.

MarriageA successful marriage is not a gift; it is an achievement.

MarriageAll marriages are happy, it's living together afterward that's tough.

MarriageNo one knows what a marriage is like except the two people in it - and sometimes one of them doesn't know.

MarriageMarriage is not a reform school.

AgeArtMaturity is the art of living in peace with that which cannot be changed, the courage to change that which should be changed, no matter what it takes, and the wisdom to know the difference.

ConfidenceFriendshipLoveLove is friendship that has caught fire. It is quiet understanding, mutual confidence, sharing and forgiving. It is loyalty through good and bad times. It settles for less than perfection and makes allowances for human weaknesses.

Self-DisciplineConfidenceClass is an aura of confidence that is being sure without being cocky. Class has nothing to do with money. Class never runs scared. It is self-discipline and self-knowledge. It's the sure-footedness that comes with having proved you can meet life.

DivorceMore divorces start in the bedroom than in any other room in the house.

DivorceMarriageAn open marriage is nature's way of telling you that you need a divorce.

Anyone who believes the competitive spirit in America is dead has never been in a supermarket when the cashier opens another check-out line.

Maturity is humility. It is being big enough to say, "I was wrong." And, when he/she is right, the mature person need not experience the satisfaction of saying, "I told you so."

Assume nothing. Inside every dumb blond there may be a very smart brunette.

Some men have no idea how to romance a woman. However, women who teach their husbands what they like will be well-rewarded.

Inside every seventy-year-old is a thirty-five-year-old asking, 'What happened?

Church is not a museum for Saints, but rather a hospital for sinners.

I was naive, but I certainly was not duplicitous.

Women's magazines continue to print 'helpful' articles on How to Hang on to Your Husband while thousands of wives write to me and complain that 'hanging is too good for 'em.

People have one year after the wedding to send a gift. Thank-you notes must be written immediately. If you don't receive an acknowledgment within three months, phone and ask if it was received. If the bride and groom are embarrassed, fine. They deserve to be.

Life is rough for everyone....Life isn't always fair. Whatever it is that hits the fan, its never evenly distributed - some always tend to get more of it than others.

Let this coming year be better than all the others. Vow to do some of the things you've always wanted to do but couldn't find the time.

Parents do not owe their progeny an inheritance no matter how much money they have. One of the surest ways to produce loafers and freeloaders is to let children know that their future is assured.

Maturity is perseverance-the ability to sweat out a project or a situation, in spite of heavy opposition and discouraging setbacks, and stick with it until it is finished.

Rose-colored glasses are never made in bifocals. Nobody wants to read the small print in dreams.

What we steadily, consciously, habitually think we are, that we tend to become.

Maturity is many things. It is the ability to base a judgment on the big picture, the long haul.

Are you better off with him or without him?

trouble is not a sign of inadequacy, stupidity or inferiority, but rather an inescapable part of life - proof that you are a card-carrying member of the human race.

Bragging is not an attractive trait, but let's be honest. A man who catches a big fish doesn't go home through an alley.

Friends with benefits? More than friends? Don't sample the goodies unless you're willing to risk addiction and withdrawal.

You need that guy like a giraffe needs strep throat.

Some things get better with age, but after a certain point, the mind isn't among them.

TV has had a stronger impact on our society than any single invention since the automobile. It has put the dead hand on conversation.

If criticism is needed, do it tactfully. Don't use a sledgehammer when a fly swatter will do the job.

The real question is why are millions of people so unhappy, so bored, so unfulfilled, that they are willing to drink, snort, inject or inhale any substance that might blot out reality and give them a bit of temporary relief.

Maintaining self-respect in the face of a devastating experience is of prime importance.

The minute more than two people know a secret, it is no longer a secret.

Most of us would be willing to pay as we go if we could just finish paying for where we've been.

guilt is a pollutant and we don't need any more of it in the world.

I made up my mind when I was 15 years old that I would never smoke or drink. I have kept that pledge to myself, and it was one of the smartest decisions I ever made.

I advise keeping four feet on the floor and all hands on deck.

Children have an uncanny way of living up - or down - to what is expected of them.

Some people take pleasure in regaling one and all with details of their poor health. They are happy to give an organ recital to anyone who will listen.

Wake up and smell the coffee.

I don't believe that you have to be a cow to know what milk is.

Maturity is the ability to make a decision and stand by it. Immature people spend their lives exploring endless possibilities and then doing nothing. Action requires courage. Without courage, little is accomplished.

In the end, it's not what you do for your children but what you've taught them to do for themselves.

Opportunities are usually disguised as hard work, so most people don't recognize them.

Keep in mind that the true measure of an individual is how he treats a person who can do him absolutely no good.

Hanging onto resentment is letting someone you despise live rent-free in your head.

Imagine you had a bank that each morning credited your account with $1,440 - with one condition: whatever part of the $1,440 you failed to use during the day would be erased from your account, and no balance would be carried over. What would you do? You'd draw out every cent every day and use it to your best advantage. Well, you do have such a bank, and its name is time. Every morning, this bank credits you with 1,440 minutes. And it writes off as forever lost whatever portion you have failed to invest to good purpose.

The real trick is to stay alive as long as you live.

Maturity is the ability to live in peace with that which we cannot change.

Problems are inevitable. Misery is a choice.

The best way to find something you have lost is to buy a replacement.

Let this coming year be better than all the others. Vow to do some of the things you have always wanted to do but could not find the time. Call up a forgotten friend. Drop an old grudge, and replace it with some pleasant memories. Vow not to make a promise you do not think you can keep. Walk tall, and smile more. You will look 10 years younger. Do not be afraid to say, I love you. Say it again. They are the sweetest words in the world.

Warmth, kindness, and friendship are the most yearned for commodities in the world. The person who can provide them will never be lonely.

Some people believe holding on and hanging in there are signs of great strength. However, there are times when it takes much more strength to know when to let go and then do it.

Remember, it takes two to make an argument. The one who is wrong is the one who will be doing most of the talking.

No one can take advantage of you without your permission.

One out of four people in this country is mentally unbalanced. Think of your three closest friends; if they seem OK, then you're the one.

People of integrity expect to be believed. They also know time will prove them right and are willing to wait.

Some women have the best husbands. Others make the best of the husbands they have.

Expect trouble as an inevitable part of life and when it comes, hold your head high, look it squarely in the eye and say “I will be bigger than you. You cannot defeat me.” Then repeat to yourself the most comforting of all words , “This too shall pass.”