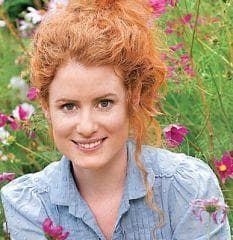 Alys Fowler is a British horticulturist and journalist. She was a presenter on the long-running BBC television programme Gardeners' World.

Fowler was born 9 November 1977 in Silchester, Hampshire, and had a rural childhood. Her father was a doctor, and her mother ran various businesses – she had 200 chickens and sold their eggs, trained gun dogs, and would dog-sit for Londoners. She was influenced by her mother's gardening talents and the degree of self-sufficiency it afforded the family. After leaving Bedales School in 1996, she studied at the Royal Horticultural Society, and the Royal Botanic Gardens, Kew in London, where she became interested in bringing a more organic and accessible aesthetic to landscape gardening. In 1998, she was awarded a Smithsonian Scholarship to study at the New York Botanical Gardens based in the Bronx.

ClothesAutumnLoveSummerI am made for autumn. Summer and I have a fickle relationship, but everything about autumn is perfect to me. Woolly jumpers, Wellington boot, scarves, thin first, then thick, socks. The low slanting light, the crisp mornings, the chill in my fingers, those last warm sunny days before the rain and the wind. Her moody hues and subdued palate punctuated every now and again by a brilliant orange, scarlet or copper goodbye. She is my true love.

NatureHeaven is a homegrown cucumber.