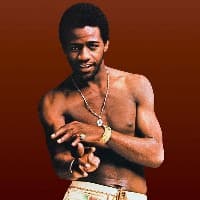 Albert Leornes Greene (born April 13, 1946), better known as Al Green, is an American singer, songwriter, pastor and record producer best known for recording a series of soul hit singles in the early 1970s, including "Take Me to the River", "Tired of Being Alone", "I'm Still in Love with You", "Love and Happiness", and his signature song, "Let's Stay Together". After an incident in which his girlfriend died by suicide, Green became an ordained pastor and turned to gospel music. He later returned to secular music.

Green was inducted to the Rock and Roll Hall of Fame in 1995. He was referred to on the museum's site as being "one of the most gifted purveyors of soul music". He has also been referred to as "The Last of the Great Soul Singers". Green is the winner of 11 Grammy Awards, including the Grammy Lifetime Achievement Award. He has also received the BMI Icon award and is a Kennedy Center Honors recipient. He was included in the Rolling Stone list of the 100 Greatest Artists of All Time, ranking at No. 65, as well as its list of the 100 Greatest Singers, at No.

I have found people on both sides of the aisle, white and black, that'll give you the shirt off their back. And I've also found people that won't give you a piece of bread if you're starving to death.

I'm thankful for every moment.

Trials can be hard, if you don't know God.

Teach success before teaching responsibility. Teach them to believe in themselves. Teach them to think, 'I'm not stupid'. No child wants to fail. Everyone wants to succeed.

If I could live my life all over I'd do everything the same; the film in my camera would remain the same; there's no way lord, to leave this love behind.

Theres a lot of churches that hide their dirty laundry under the rug, and I know about that from being in the church 27 years. Oh, yeah.

I didn't have a mother; I had a mama. I measure other women by the stature of my mama.

No child wants to fail. Everyone wants to succeed.

People still come up to me and ask me to sign their records. That's right, records! Man, they don't even make records no more!

Suicide is not an answer, it's destruction.

Some people believe that fairness comes with obeying the rules. I'm one of those people.

I learned more stuff in church than I did in the world.

I did a whole concert in Atlanta with my fly open, and I had a black suit on and a white shirt. My white shirt was protruding from the fly.

Pakistan's being an ally and helping the United States, we ought to show Pakistan that we are appreciative for the help that's been extended.

GM is operating in an intensely competitive global environment and reaching this tentative agreement allows us to continue to build momentum in the market with the award-winning vehicles and components produced in Canada.