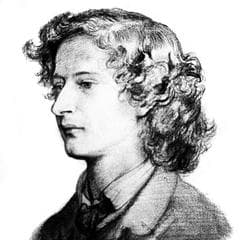 Algernon Charles Swinburne (5 April 1837 – 10 April 1909) was an English poet, playwright, novelist, and critic. He wrote several novels and collections of poetry such as Poems and Ballads, and contributed to the famous Eleventh Edition of the Encyclopædia Britannica.

Swinburne wrote about many taboo topics, such as lesbianism, cannibalism, sado-masochism, and anti-theism. His poems have many common motifs, such as the ocean, time, and death. Several historical people are featured in his poems, such as Sappho ("Sapphics"), Anactoria ("Anactoria"), and Catullus ("To Catullus").

Where might is, the right is: Long purses make strong swords. Let weakness learn meekness: God save the House of Lords!

When I hear that a personal friend has fallen into matrimonial courses, I feel the same sorrow as if I had heard of his lapsing into theism — a holy sorrow, unmixed with anger.

There is no such thing as a dumb poet or a handless painter. The essence of an artist is that he should be articulate.

In hawthorn-time the heart grows light.

The delight that consumes the desire, The desire that outruns the delight.

Love is more cruel than lust.

When fate has allowed to any man more than one great gift, accident or necessity seems usually to contrive that one shall encumber and impede the other.

His life is a watch or a vision Between a sleep and a sleep.

From too much love of living, From hope and fear set free, We thank with brief thanksgiving Whatever gods may be That no life lives for ever; That dead men rise up never; That even the weariest river Winds somewhere safe to sea.

There is no God found stronger than death; and death is a sleep.

For winter's rains and ruins are over, And all the season of snows and sins; The days dividing lover and lover, The light that loses, the night that wins; And time remembered isgrief forgotten, And frosts are slain and flowers begotten, And in green underwood and cover Blossom by blossom the spring begins.

There is no safety-net to protect against attraction.

In the world of dreams, I have chosen my part.

The sweetest flowers in all the world- A baby's hands.

I am tired of tears and laughter, And men that laugh and weep Of what may come hereafter For men that sow to reap: I am weary of days and hours, Blown buds of barren flowers, Desires and dreams and powers And everything but sleep.

I have lived long enough, having seen one thing, that love hath an end

Love, as is told by the seers of old, Comes as a butterfly tipped with gold, Flutters and flies in sunlit skies, Weaving round hearts that were one time cold.

Blossom by blossom the spring begins.

I remember the way we parted, The day and the way we met; You hoped we were both broken-hearted And knew we should both forget.

Fate is a sea without a shore, and the soul is a rock that abides.

Time stoops to no man's lure.

Ask nothing more of me sweet; All I can give you I give; Heart of my heart were it more, More would be laid at your feet.

His speech is a burning fire.

Body and spirit are twins: God only knows which is which.