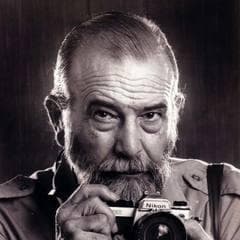 Korda, whose real name was Alberto Díaz Gutiérrez, was born on September 14, 1928, in Havana, Cuba. He got his first taste of photography when he took his father's Kodak 35mm and began taking pictures of his girlfriend. Korda was the son of a railway worker, and took many jobs before beginning as a photographer's assistant. Korda began his career as a photographer who shot pictures at banquets, baptisms and weddings. He would run back to his studio to develop the film, then return to the event and sell his photographs as souvenirs. The quality of Korda's work as a beginner was very poor; after a few months the image became blurry and the paper yellowed. When he opened his first studio, Korda had an opportunity to learn from his mistakes and to stop the yellowing process by using the right chemicals for the correct durations of time. In 1953, Korda opened his first studio with a photographer named Luis Pierce. Initially, Korda and Pierce took a variety of jobs ranging from fashion to advertisements.

BeautyWomanThe beauty of women was the first expression of my photography.

To use the image of Che Guevara to sell vodka is a slur on his name and memory. He never drank himself, he was not a drunk, and drink should not be associated with his immortal memory... As a supporter of the ideals for which Che Guevara died, I am not averse to its reproduction by those who wish to propagate his memory and the cause of social justice throughout the world.

I remember it as if it were today... seeing him [Che] framed in the viewfinder, with that expression. I am still startled by the impact... it shakes me so powerfully. (On his iconic photo of Che Guevara)

There's something about his eyes in the photo. A kind of mystery. His personality comes through. It's always hung on my walls and I've given it to many people as a present. (On his iconic photo of Che Guevara)

Forget the camera, forget the lens, forget all of that. With any four-dollar camera, you can capture the best picture.