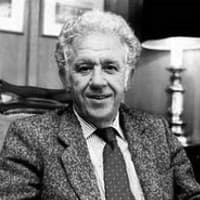 Albert Gubay, KC*SG (9 April 1928 – 5 January 2016) was a Welsh businessman and philanthropist, who made his fortune with the Kwik Save retail chain, building it further on investments, mainly in property development. According to Forbes, in 2006 Gubay had an estimated fortune of approximately GBP500 million (US$1.1 billion), making him the 698th richest person in the world.

All quotes by Albert Gubay:

Stupid people do make me lose my temper and most people are stupid, fortunately for me. It's made it easier for me to make a living.

My belief in a day of reckoning keeps me on the straight and narrow.

I was always made to work at a very early age. I finished school at 4 P.M. and by 5 P.M. I was working. It was seven days a week.

To be able to keep the promise I made to God, I think that keeps me going. No matter how much the money had been, I would have always fulfilled my promise, as that's the way I am.

I had a very hard father. I had two sisters. He was soft on them and hard on me.

I borrowed 100 pounds and made the pact with God: Make me a millionaire - and you can have half of my money.