Best quotes by A. J. Bowen 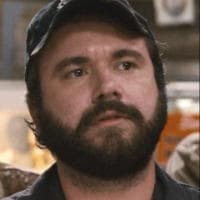 Acting workTo have a part that is written for you certainly helps an actor.

Acting workTelevisionA lot of cable television is shot on a single camera. Our eyes are more trained to that. It takes the camera off the crane, away from observing the action, to becoming a character in the story along with everyone else. People are getting used to that.

Acting workI did four movies where I gained, like, fifty pounds. I had curly hair, and I had all of this facial hair. I had put on all this weight for these movies, and I did four or five of them back-to-back. Then I cut the weight and I got fit again. I cut my beard and I took away the mustache, and people were like, 'What are you doing?'

Actors about themselvesI'm an incredibly intelligent, insightful human being.

Acting workAs an actor, the ambition is to play interesting characters. And in the indie genre world, the budgets are low. That allows me, as an actor, not to have a financial value behind my name, to justify me being in these bigger parts for these types of movies.

Acting workTo be fair, I don't think it's a plague to say I have the misfortune of making movies for a living.