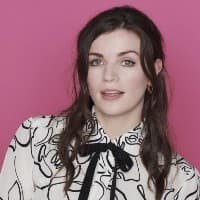 Aisling Bea is an actor, stand-up comedian and writer from Ireland. In 2020, she won a BAFTA for Breakthrough Talent for her television series This Way Up in which she also starred. In 2014 she won the British Comedy Award for Best Female TV Comedian. She trained at LAMDA (The London Academy for Music and Dramatic Art). In 2012 she won the Gilded Balloon So You Think You're Funny? stand-up competition, the first woman to win it in twenty years.

Bea was a vocal supporter of the Repeal the 8th campaign in the successful 2018 Irish referendum to introduce legal abortion in the Republic of Ireland, including her contribution of an essay to Una Mullally's Repeal the 8th a month before the vote. She previously campaigned for same-sex marriage legislation in the successful 2015 Irish referendum.

FashionIt's a difficult thing to be in fashion or popular - it's all so fickle.

It's a difficult thing to be in fashion or popular - it's all so fickle.

For ethical fashion, I really like Reformation. It's so fashionable - no hemp trousers.

In this modern world, where we have filters to make us look as nice as possible, it's good to take off the filter and go, 'I could look stupid here.' You'll learn something and be better for it.