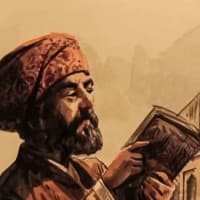 Abū Ḥanīfa al-Nuʿmān ibn Thābit b. Zūṭā ibn Marzubān (c. 699 – 767 CE), known as Abū Ḥanīfa for short, or reverently as Imam Abū Ḥanīfa by Sunni Muslims, was an 8th-century Sunni Muslim theologian and jurist of Persian origin, who became the eponymous founder of the Hanafi school of Sunni jurisprudence, which has remained the most widely practiced law school in the Sunni tradition, predominates in Central Asia, Afghanistan, Persia (until the 16th century), Balkans, Russia, Chechnya, Pakistan, Bangladesh, Muslims in India, Turkey, and some parts of the Arab world. Some followers call him al-Imām al-Aʿẓam ("The Greatest Imam") and Sirāj al-aʾimma ("The Lamp of the Imams") in Sunni Islam.

Born to a Muslim family in Kufa, Abu Hanifa is known to have travelled to the Hejaz region of Arabia in his youth, where he studied in Mecca and Medina. As his career as a theologian and jurist progressed, Abu Hanifa became known for favoring the use of reason in his legal rulings (faqīh dhū raʾy) and even in his theology. Abu Hanifa's theological school is claimed to be what would later develop into the Maturidi school of Sunni theology.

All quotes by Abu Hanifa:

Faith does not increase, nor does it decrease; because a diminution in it would be unbelief.

Who are we to wish for Paradise? It will be enough if Allah spares us his wrath.

If I were you I would face my clothes, to make sure that no one runs off with them!

When a hadeeth is found to be saheeh, then that is my madhhab.