Best quotes by A. A. Gill 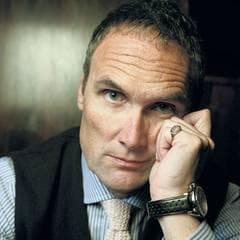 Adrian Anthony Gill (28 June 1954 – 10 December 2016) was a British journalist, critic, and author. Best known for his food and travel writing, he was also a television critic, was restaurant reviewer of The Sunday Times, wrote for Vanity Fair, GQ, and Esquire, and published numerous books.

After failing to establish himself as an artist, Gill wrote his first piece for Tatler in 1991 and joined The Sunday Times in 1993.

Known for his sharp wit, and often controversial style, Gill was widely read and won numerous awards for his writing. On his death he was described by one editor as "a giant among journalists." His articles were the subject of numerous complaints to the Press Complaints Commission.

A. A. Gill quotes by category:

BeautyIf the world were to end tomorrow and we could choose to save only one thing as the explanation and memorial to who we were, then we couldn't do better than the Natural History Museum, although it wouldn't contain a single human. The systematic Linnean order, the vast inquisitiveness and range of collated knowledge and beauty would tell all that is the best of us.

WarAll my life I've been aware of the Second World War humming in the background. I was born 10 years after it was finished, and without ever seeing it. It formed my generation and the world we lived in. I played Hurricanes and Spitfires in the playground, and war films still form the basis of all my moral philosophy. All the men I've ever got to my feet for or called sir had been in the war.

HealthI walk up a dune to a beach and look out to sea, but it's 100km away. The ships lie askew in their dry beds, at anchor for ever. Today is my son's birthday. Thousands of miles from here, his healthy lungs are blowing out candles. I should be there but I'm here with another boy, who puts his face close to mine and laughs. I smile back but realise he can't see it, because I'm wearing an antiseptic muzzles to protect me from his breath.

TelevisionTelevision gives us the gift to see ourselves as we'd like to be seen.

There were moments when I wondered at the gossamer veil that stops licence from being libel. I suspect that taking on the job of England manager puts you outside the protection of the courts. It must be part of the job description that you will be held hostage by media speculation and can have your character tortured, molested and finally executed at the public whim, in exchange for a lifetime's supply of money.

Sport is how poor kids from poor countries pass through the eye of the needle to riches and recognition.

Is it a particularly British trait to so utterly adore truly appalling men, from Tony Hancock through to Steptoe and Alf Garnett, Captain Mainwaring, Rigsby, Del Boy, Victor Meldrew and on to David Brent from The Office. The most deeply adored characters are all simply vile.

Celebrity is a national drama whose characters' parts and plots are written by the tabloids, gossip columnists, websites and interactive buttons. The famous don't actually have to turn up to their own lives at all.

Americans think the only funny Brits are John Cleese, Benny Hill and whoever makes our toothpaste. They're not laughing with us, they are laughing at us.

A broadsheet obituarist once pointed out to me that veteran soldiers die by rank. First to go are the generals, admirals and air marshals, then the brigadiers, then a bit of a gap and the colonels and wing commanders and passed-over majors, then a steady trickle of captains and lieutenants. As they get older and rarer, so the soldiers are mythologised and grow ever more heroic, until finally drummer boys and under-age privates are venerated and laurelled with honours like ancient field marshals. There is something touching about that.

Television in the 1960s & 70s had just as much dross and the programmes were a lot more tediously patronising than they are now. Memory truncates occasional gems into a glittering skein of brilliance. More television, more channels means more good television and, of course, more bad. The same equation applies to publishing, film and, I expect, sumo wrestling.

I still secretly believe that afternoons are the time for the test card and you shouldn't watch television when the sun is out.

Nobody ever forgets their first night in the bush. It's among the precious, meagre handful of life firsts that remain indelible.

It's a great historical joke that when the Spanish met the Aztecs, it was a blind date made in serve-you-right heaven. At the time, they were the two most unpleasant cultures in the entire world, and richly deserved each other. Still, the story of how stout Cortes blustered, bullied and bludgeoned his way to collapsing an entire empire with a handful of contagious hoodlums is astonishing.

We like to see death as an unfair conspiracy, and what we want is a magic practitioner, a combination of Dr Watson and Sherlock Holmes.

I don't know how long a child will remain utterly static in front of the television, but my guess is that it could be well into their thirties.

America didn’t bypass or escape civilization. It did something far more profound, far cleverer: it simply changed what civilization could be.

My father was a film-maker. He always said he wanted to go like Humphrey Jennings, the legendary director who stepped backwards over a cliff while framing a better shot.

A country scratching a lazy irritation at sagging doorjambs and late trains, whose greatest attribute is a collective, smelly tolerance, where a chap will put up with almost everything, which means he won't care about anything enough to get out of a chair.A country of public insouciance and private, grubby guilt, where you can believe anything as long as you don't believe it too fervently. A country where the highest aspiration is for a quiet life.

An American has invented a remote control that will turn off any telly within a 20ft radius. What a marvellous device! What a splendid invention! What a really helpful and improving way of devoting your time to building something that turns off culture. Next week, I'm instigating Burn a Book Week, to encourage even more conversation. I've come up with a fantastic little device which I'll call a box of matches.

Television is a constant stream of fact, opinions, lies, moral dilemmas, plots: an infinitely complex and sophisticated torrent of information. How could it not make you cleverer? The only people who ever thought television rotted the brain and made kids dumb were those with a vested interest in other ways of learning, or those who were intellectually insecure, usually about books.

Once upon a time, a historian told me that the most important choice a new historian could make was of his or her specialist subject. Most of the good stuff was far too overcrowded, so you had to pick about in the exotic and extinct. His recommendations were the Picts or the Minoans, because hardly anything was known about them and you could spend a happy lifetime of speculation.

Get up now and go and find Robert Kilroy-Silk. Smile in a warm, friendly sort of way, then punch him on the nose. Now go and find Robert on television, despite my best endeavours, this is still relatively easy to do. Wait for a close-up, same smile, and punch him on the nose. If you followed the instructions carefully, you will have noticed a distinct difference. On the one hand, you were suffused with a sense of public-spirited righteousness; on the other, you're probably dribbling blood. That's the difference between reality in life and reality on television.

The usual sniggering examples of animal behaviour were brought in to explain cheating. Funny how the behaviour of shrews and gibbons is never used to explain table manners or road safety or gardening, only sex. Anyway, it was bad Darwinism. Taking the example of a monkey and applying it to yourself misses the point that animal behaviour is made for the benefit of the species, not as an excuse for the individual. Being incapable of sustaining a stable pair and supporting children is really not in the interests of our species. Neither is it really in the best interests of the philanderer.

Like most parents, I've been stumped by homework, the big questions, such as: 'What is the point of geography - the pilot always knows where we are going?'. Answer: 'If you didn't know any geography, people would think you were an American, and you wouldn't be able to put them right because you wouldn't know where they live.'

The reason that chefs become chefs is that they're not allowed into rooms with windows.

Science fiction is never about the future, in the same way history is rarely about the past: they're both parable formats for examining or commenting on the present.

Making a programme that appears to condone a positive stereotype actually enforces all the negative ones as well. It says that they all have a valid point. To assert that Americans are naive, Germans humourless and the French arrogant is one thing: they're big enough to take it. But to say that there's a conspiracy of Jewish bankers, that gypsies are thieves, Pakistanis are dirty and refugees are muggers is something quite else.

Beautifully shot, impeccably paced, it was a clear, unrelenting look at the National Trust, its friends and enemies, and it makes you want to burn your passport and beg the Luftwaffe to have another go.

Facts are what pedantic, dull people have instead of opinions.

A lobster bisque ought to be the crowning glory of the potager. And this one was excellent. Silky as a gigolo's compliment and fishy as a chancellor's promise.

You either get the point of Africa or you don't. What draws me back year after year is that it's like seeing the world with the lid off.

Breakfast is everything. The beginning, the first thing. It is the mouthful that is the commitment to a new day, a continuing life.

The truth and the facts aren't necessarily the same thing. Telling the truth is the object of all art; facts are what the unimaginative have instead of ideas.

The interesting adults are always the school failures, the weird ones, the losers, the malcontents, this isn’t wishful thinking. It’s the rule.

Being kindFriendshipSo, being a good man is not an exam or a qualification, it changes, and it incorporates being a good friend, a good father, a good employee, a good boss, a good neighbour and a good citizen.

FashionYou don't have a choice about fashion or aesthetics - you're in it, whether you like it or not.

FashionI've often been accused of dressing too well. I've always been fascinated by fashion, though I don't think I'm particularly fashionable.